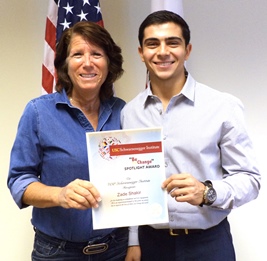 Zade Shakir is by far the most inspirational figure in my life right now and I’ve only known him for little over a year. He has a genuine, heartwarming, and enthusiastic attitude that immediately made me feel valued and welcome from the moment I met him as an insecure freshman at USC. He has been a big brother to me and has always been there to give me advice and counsel no matter how busy or stressed he has been, or how trivial my troubles may have seemed. Aside from forming solid and lasting relationships with his friends and fellow Trojans at USC, he has taken extra steps to apply his infectious enthusiasm to several different public service outlets, most notably to an organization he started all by himself, called, “Kicks for Kids”. The program hosts weekly soccer games for local special needs children who can run around to their hearts content while learning the importance of healthy lifestyles.

It was clear from our first meeting together back in May that Zade meant to do something big with this organization, and thus far, he has. He was so moved with his experience at USC’s own Special Olympics hosted by Spirits in Action last year that he wanted to do more for these underprivileged and special needs kids. He decided to start Kicks for Kids so that many of those same kids could come out on a weekly basis to exercise, learn some basic soccer skills, and most importantly – have fun! To get the program on its feet Zade essentially took all the necessary initiatives into his own hands. He single handedly raised the funds that allowed us to purchase permits for use of McCarthy Quad, healthy snacks, and hundreds of T-shirts when he took time out of his summer to travel to a Medical conference in Toronto to ask for donations.

The inaugural year of Kicks for Kids is almost halfway done, and our expectations have been more than exceeded. The parents, volunteers, and children that come out week in and week out have consistently lauded the Kicks for Kids organization for its efforts to raise the spirits of these special needs children. One parent has shared over Facebook in relation to her autistic daughter: “I’ve looked for a place where Elise can be herself, I found it! Thanks Kicks for Kids.” Another mother of an autistic daughter commented on a Kicks for Kids photo that Kicks for Kids is “organization that teaches kids with special needs soccer skills or on Bailey’s case she gets a buddy to run around with for 2 hours and occasionally kicks the ball or runs. It is a great program.” It is clear from the feedback after events and over social media that the organization Zade started has made a huge impact on many people’s lives.

In the little time I’ve known Zade, I’ve come to learn that he has a way of bringing out the best in people, and most of the time, that also comes with a smile. There isn’t a doubt that Zade has made an impact on so many people’s lives when he started this organization, and it has shown with all the families and children that keep returning every week for Kicks for Kids. For me, Zade has been the change that I aspire to be, and I definitely think he deserves the student Spotlight Award.