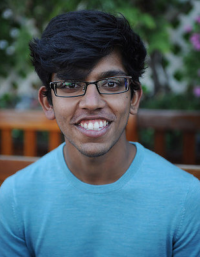 Yash Gupta was 5 when he got his first pair of eyeglasses. He became dependent upon them since that day, so much so that he began taking them as an afterthought until his freshman year of high school, when he broke his glasses sparring in taekwondo. It was when he was forced to go to school without a pair of eyeglasses for a week that he truly realized the transformative impact glasses had on his education. Yash did some research and learned than 13 million children around the world lacked eyeglasses because they couldn’t afford them. So, only 14, he founded Sight Learning, a non-­‐profit organization that to date has collected and distributed more than $1,100,000 worth of used eyeglasses, equivalent to more than 22,000 pairs, to students in Mexico, Honduras, Haiti, India, and the United States.

Furthermore, Sight Learning has organized and run several international eye-­‐clinics that provide free eye-­‐care to these students and their families and allow for personalized attention that they may otherwise lack.

While Sight Learning may have been a tremendous idea, there were many obstacles that Yash faced when founding the organization, especially in regards to building trust and relationships with different people despite his age. Yash developed a website, made fliers, and went door-­‐to-­‐door in an attempt to get as many people on board as he can, and when he failed, instead of being discouraged, he became more passionate about trying to improve the organization and help even more people. For example, when in need of funding, Yash began tutoring elementary school students in his free time and used the funds back into the organization to help other people. He went through a heavy amount of paperwork and logistical work to set Sight Learning up as a 501(c)(3) non-­‐profit to ensure that Sight Learning would be an organization that remained impactful for a long time.

Yash took a vision of a small-­‐scale project and turned it into an international non-­‐ profit and was able to do so through his passion for Sight Learning and helping students around the world. Initially he began by reaching out to local optometrists, trying to get them to have patients donate their old pairs of glasses to Sight Learning. Along the way however, Yash became an inspiration to many young children around the world who started seeing the impact of Yash’s work and the fact that Yash’s age didn’t stop him from making a difference. Students from all around the globe began contacting Yash wondering how to get involved and to start Sight Learning chapters at their schools, eventually resulting in Sight Learning chapters being founded at schools in 14 US states and in 3 countries around the world.

Now, as a student at USC, Yash continues to expand Sight Learning to help even more people internationally, garnering the support of major corporations to give donations and planning and executing even more eye-­‐clinics around the world to ensure that every student has access to eyeglasses just like he did.