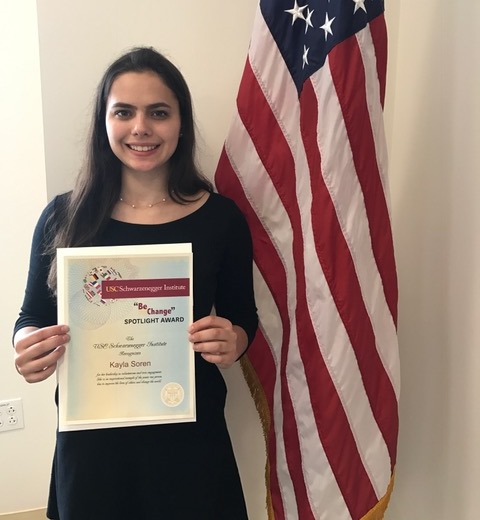 Kayla Soren is the Founder and Executive Director of the International Student Environmental Coalition (ISEC), an organization that engages 20 countries and hundreds of youth from around the world in environmental activism. She developed it as a solution to the feeling of apathy and helplessness among youth for doing their part to minimize climate change. The organization was recently recognized as an official partner of the UN, and she represented ISEC at the UN in mid-February. ISEC will now be representing youth voice in all major climate negotiations.

She came up with the organization in summer 2015 at the Ben Franklin Transatlantic Program, a program by the United States State Department that brings together 10 Americans and 35 Europeans to study diplomacy and social entrepreneurship. At this conference, the participants worked with mentors to conduct final projects, and ISEC became Kayla’s final project. The idea stemmed from her feeling of being insignificant to stopping such a complex global issue like climate change. She wanted to unite students to change the mindset that young people cannot influence the environment. If students could see their peers from around the world doing little actions to minimize their environmental impact, they could see the collective impact that truly does make a difference.

Kayla did not want the Coalition to be simply from my own ideas, so she wanted to launch the organization with a conference so that it could be created from a global perspective from the beginning. She won a $25,000 grant from the U.S. State Department for the conference, and she selected participants from seven different countries: Iceland, Romania, United States, Denmark, Germany, Switzerland, and the United Kingdom. The conference was held from August 3-13 2016 in Cologne, Germany and was fully funded for all participants.

Unified under a common care for climate change, the participants studied pressing environmental issues and activism strategies, created final projects, and worked to forge an international coalition to sustain a support base for youth activists. Her conference had three key strategies: to educate and inspire world activists, to create follow up projects, and to forge an international coalition that provides support for such activists and such projects around the world.

In addition to individual events within countries, they have four core working groups. The first is the food working group, which is working on food saver programs, implementing city gardens, creating and an elementary school curriculum. The clothing working group aims to raise awareness and shift common consumption patterns of “fast fashion.” The political working group writes policy and communicates with government officials. The Methaway working group is in the process of patenting a device to convert methane into energy for barns. ISEC also organizes monthly Days of Action, in which they create on-the-ground events once a month in each participating country. They engage hundreds of youth around the world perform the same action for the environment, which ensures worldwide media coverage and a greater change.