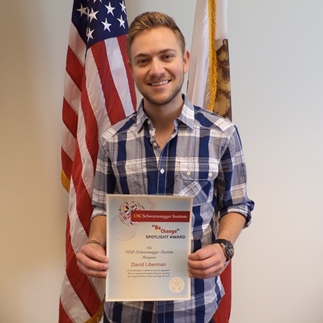 I operate a small NGO in Latin America called Volunteers Around the World. We help university students coordinate medical clinics in Guatemala and the Dominican Republic. When I met David we were a fledgling NGO that averaged about 15 volunteers per year. David had just finished his sophomore year and came to Guatemala as the Vice President of the first team from use.

David and I worked together in Guatemala for about 2 weeks that summer. He took the role in leading the clinics each day and assigned positions to every volunteer . I knew immediately that David had the character, the ability, and the drive to make a huge impact on our organization.

I began working more closely with David after that first summer. He took a lead role as Team Leader at USC and was instrumental in bringing 44 volunteers from USC to Guatemala and even expanded to the Dominican Republic during the summer of 2013. He is currently working with the other team leaders at USC not only to continue to send 40+ students to Guatemala and the Dominican Republic, but is also helping to recruit volunteers to send an additional 20+ to Panama. The team at USC is by far the most organized and well-developed team we work with now. In 2013, our total volunteers numbered 136 - we conducted 66 medical clinics, treated over 11,000 patients, and brought more than $14000 worth of medications to Latin America . David has been a very important part of why this has been possible.

During our conversations in Guatemala, David expressed an interest in forming dental clinics as part of our operations. During the summer of 2013, David succeeded in bringing the first group of dental volunteers to Guatemala to assist dentists in performing extractions as well as medical volunteers to staff a medical clinic. The dental clinic was a huge success-they were able to treat on average SO patients per day! The communities we work in were extremely grateful for this important service to which they normally have no access.

Due to the success of this pilot Dental trip - David has decided to take the dental clinic to a whole new level. He is in the process of creating a dental clinic in the Dominican Republic this summer that will perform all of the same procedures as a general dental office. He is currently recruiting pre-dental students at USC to volunteer for this new clinic, and so, we are excited to start a dental sector of Volunteers Around the World with him.As a result, we made David the VP of Dental Team Leader Development - David is now responsible for recruiting team leaders from allover the United States, Canada, and Europe. He has figured out how to obtain the $10,000 worth of equipment we need to offer a wide range of dental procedures. I am confident that he will succeed in this endeavor and when he does, the number of people we will be able to help is staggering.

It is only every once in a great while that an organization is blessed to work with a volunteer like David Liberman. His influence on our organization will have lasting implications for many years. It is leaders like David who make a real difference in the world.